Sat upon a peak of the Serra de Sintra, half-buried under forest and looking like a crown from below, is the Moorish Castle (Castelo dos Mouros). It is so named after the Moors who built a mighty fortification on this spot in the 10th Century. The walls you see now are, however, much more recent. During the 19th Century, when Sintra was engulfed in Romanticism, the walls were restored. They had previously been badly damaged by the devastating earthquake of 1755. Ferdinand II, the German prince of the House of Saxe-Coburg and Gotha-Koháry and husband of Queen Maria II, built the Pena Palace and incorporated the Castle in his plans for the surrounding park. Later during the Salazer regime, further restorations were carried out following the fascist doctrine of glorifying Portugal's past achievements. Today the Castle makes for a great excursion, exploring the ruins, taking in the views and exploring the surrounding forest.

THE HISTORY OF THE MOORISH CASTLE 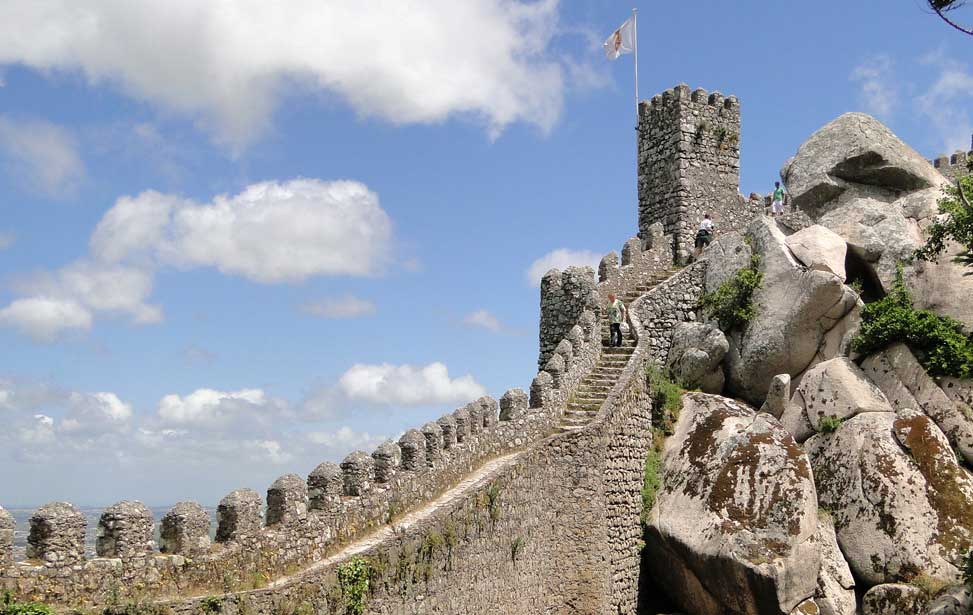 Excavations have found evidence of habitation dating as far back as the Bronze Age. Discoveries have shown almost constant use of the site ever since. The first castle on this site was erected by the Moors after taking control of the area during the 8th and 9th centuries. After the conquest of Lisbon in 1147 by Christian forces led by Afonso Henriques, the castle surrendered without a struggle. The current configuration of the walls are a result of the modifications made shortly after the Christian take over.

Two sets of ramparts run irregularly around the granite boulders that dot these hills and along the peaks of the sharp and steep cliff faces. The area in-between the two walls would have accommodated the population who serviced the needs of the castle. Evidence of the original Islamic community can be found here with traces of foundations of their homes, an oven and granaries. Close to the entrance of the inner section, there's a restored building, the 12th century Church of São Pedro de Canaferrim, which houses an information centre containing archaeological finds and an exhibition explaining the castle's history.

For the most, the castle is an empty shell. It has been restored to be admired from below. However, inside the inner walls, you can find the ancient cistern where water tanks could store up to 600 cubic metres. Its granite blocks used in its construction show signs of having been transferred from another pre-existing structure. The lack of stonemasonry marks in addition to the access doorway's broken arch, suggests the cistern was constructed in the early 13th century. Legend says underneath the cistern lies the grave of a Moorish king.

The large open square was once the parade ground for the garrison's troops. It was converted by King Ferdinand II into a relaxing park area. When you walk the ramparts you have the opportunity to admire the spectacular views across the lands below and see many of Sintra's other major attractions from a birds-eye perspective. From the keep, which occupies one of the highest points of the site, you can marvel at the magnificent Pena Palace that looms overhead.

ONLINE TICKET | With this entrance ticket you can gain entry to the Moorish Castle at your leisure. Buy online before you arrive to avoid queues and have the convenience of the e-ticket on your phone… 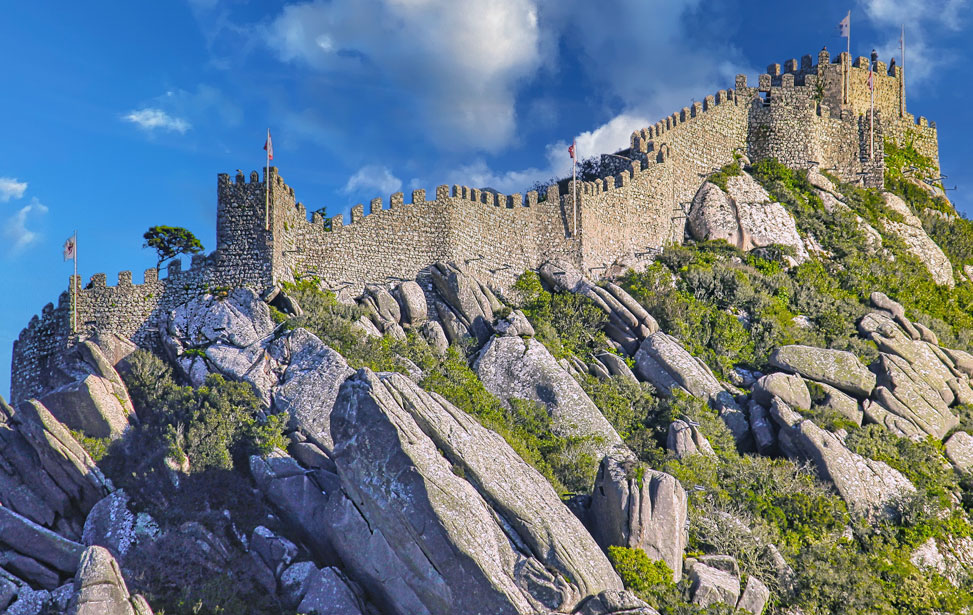 On this tour, you will have the opportunity to visit the Queluz National Palace, the Moorish Castle and the Mafra National Palace, a Basilica and a Convent. You will get to know the splendid village of Ericeira, one of the few places in the world that have been declared a World Surfing Reserve. You will be dazzled by the José Franco Typical Village and its miniature museum. It demonstrates the various daily activities of the early twentieth century. 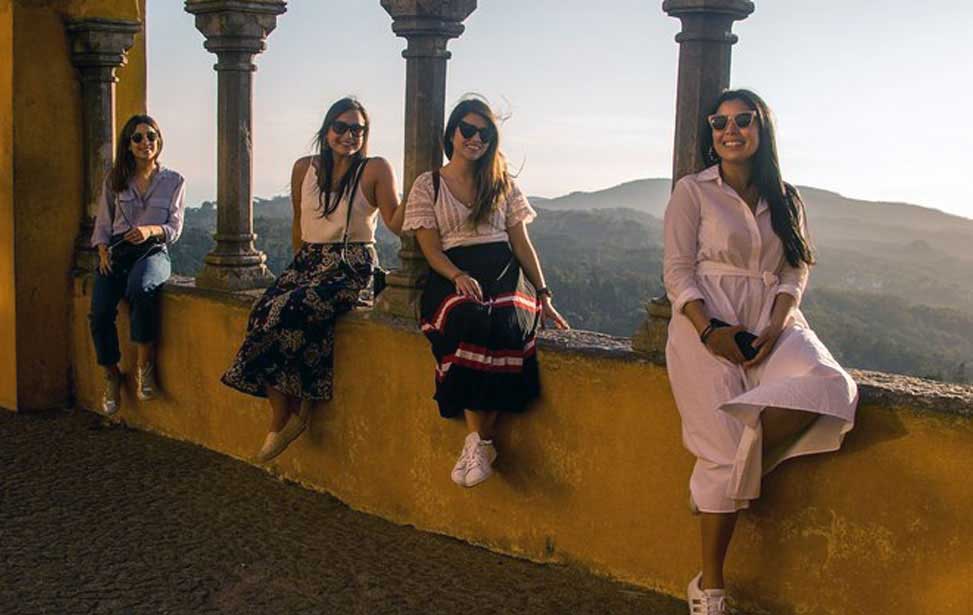 The tour will be a day trip where travellers can enjoy the different faces of Sintra. From the historic centre and the marvellous monuments to the coastline, where small villages are nestled between the rocks and the sea. The itinerary is designed in a way guests can visit the most popular spots. Discover the hidden treasures only the locals know of and taste the fantastic Portuguese cuisine. We will avoid crowds and your tour is 100% customisable.

Full Day Tour - at your own pace

Through the eyes of a former journalist, in love with Portugal and Portuguese culture and history. Come to Sintra to see palaces and monuments that make the history of Portugal in the 18th and 19th centuries. You don't have to wait in line to buy a ticket and go ahead without wasting time. Stop for lunch at a typical Portuguese restaurant on the seafront or in the picturesque village centre. Get to know the coast of Sintra and the westernmost point of Continental Europe; Cabo da Roca. A day well spent taken at your own pace. This tour is a unique and personalised experience. Guaranteed an unforgettable day!

AMENITIES AT THE MOORISH CASTLE 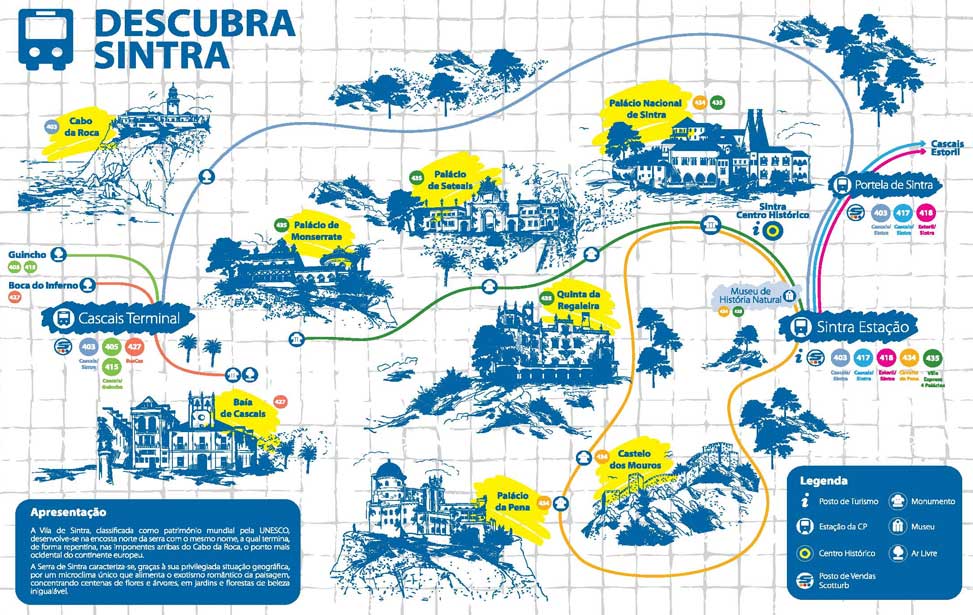 TRAVELLING TO THE MOORISH CASTLE

There are hiking trails signposted between the historic centre and the Moorish Castle (Castelo dos Mouros).